"Holocaust was just one page of Shoah."

Nazi-destruction of "jüdischer Geist" as important dimension of shoah 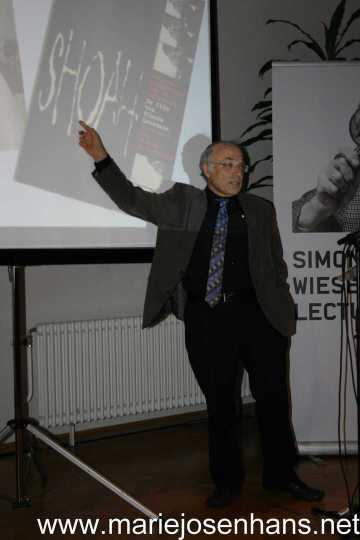 Dan Michman during his lecture in Vienna.

The local from Vienna - with whom I talk accidentally - does not seem to be very interested in the topic of the lecture. He speaks his mind openly: "With such things, I have got nothing to do."

Such Things - these are "Shoah, Churbn, Cataclysm, Judeocide, Holocaust, Genocide (and more)". At least that is the title of Dan Michman`s lecture on Thursday, 23rd Oktober in Vienna Haus-, Hof- und Staatsarchiv. And its subtitle: "On Terminology and Interpretation." So the topic is about language regarding a historic phenomenon which is known as "holocaust" or "shoah". Now questions of terminology do not have the reputation of being very thrilling. Is the question how people have called the most appalling chapter of Nazi time nothing else than an academic "Glasperlenspiel", a "Glass Bead Game" Hermann Hesse alluded to in his book ? At the end, I think, these studies cannot change anything about the terrible facts. I am on the verge of admitting that my chance acquaintance is right. But what I find interesting is that Vienna Wiesenthal Institute has invited. And Simon Wiesenthal - on an XXL poster with a magnifying glass - watches Dan Michman closely during his lecture. Wiesenthal´s mantra has been: "Aufklärung ist Abwehr (enlightenment is defense)."

Dan Michman starts with the word "shoah". Right, this Hebrew word must be the oldest one, it can be found in the Old Testament. Jesaja 10,3 asks: "What will you do on the day of reckoning, when ,shoah` (disaster) comes from afar ?" So the author of this line has not been thinking at massacres against Jews, when writing down the word "shoah"; he has just tried to describe the upcoming danger on the "day of reckoning". So it is obvious that the term "shoah" originally has had nothing to do with massacres against Jews. Michman: "If E.T. came, then he could not see from the word itself what it means today." The word "shoah" was filled with new content.

When ? Michman has carried out meticulous research. Vladimir Jabotinsky already warned in 1930: If polish Jewry is not saved , "it will be very bad, in the end so bad as to be a ,shoah`". And writer Chaim Nachman Bialik said in May 1933, one year before his death: "a great ,shoah` (...) befell German jewry all of a sudden". In May 1933 Hitler held power since four months. Already Jewish lawyers and physicians were banned from their professions, Jewish officials were dismissed, there were boycotts against Jewish shops - und in KZ Dachau the first Jewish prisoners had died. However, there was still no mass murdering of Jews. So Bialik, mentioning a "shoah" that happened 1933, meant the deprivation of Jews´ rights, not their mass murder. Jabotinsky, on the contrary, in 1930 already feared the mass murder of Polish Jewry and named it "shoah". It seems to me that Jabotinsky is the father of the word "shoah" in its today meaning.

Michman remembers the conference of the Vienna Wiesenthal Institute in 2012. Its title: "When Holocaust still had no name ..." Michman: "I have wondered whether one can say so..." Because as early as 1930 holocaust had a name - not the name "holocaust", but "shoah".

Now Michman has arrived at the term "holocaust". Did I know that it is a Greek word ? Not really. "Holocaust" is the Greek translation of a Hebrew word from Old Testament meaning "burnt offering". At the beginning of the 20th century already it was used for fire disasters: The book "holocaust in Minnesota" from 1918 deals with the big forest fire there. In 1909 and 1922 the word was used to describe the massacres against Armenians. A Jewish newspaper in Australia said already in 1933 that "holocaust" is taking place in Germany in 1933. The newspaper meant the deprivation of Jews´ rights and assaults against Jews, too, but not mass murder. The declaration of independence of Israel from 1948 does not use the term "holocaust" - as it is a Greek and no Hebrew word !

Michman also dispels the myth that Yad Vashem has made use of the word "holocaust" already from its beginnings: He shows the first edition of the periodical "Yad Vashem Studies" from 1957. Its title: "On the European Jewish Catastrophe". So nothing about "holocaust" ! However, it is true that translators of Yad Vashem writings employed the term "holocaust" early, but these were only singular cases. The turning point came at the end of the 1950s: In 1958 French Nobel prize laureate Mauriac wrote in his introduction to Elie Wiesel`s book "La nuit" ("The night") about "holocaust". After that the term established itself all over the world. And the TV series "Holocaust" from 1978 (with Meryl Streep) - Michman`s comment in German: "Kitschfilm" - added to this effect ...

Before, Michman has said that the meaning of the word "shoah" today has nothing to do with its original meaning. And the same applies to the term "holocaust". As time went on, the meaning of "holocaust" even widened: The Nazi persecution of honosexuals was called "Homo holocaust", the mass murder of Sinti "Sinti holocaust" and the enslavement of Africans "Black holocaust".

And now Michman surprises his audience: "Holocaust was only one page of shoah." In addition to the mass murdering of Jews, Nazis did even more evil during "shoah": The Nazis wanted to destroy - Michman says it in German - "jüdischen Geist", the "Jewish spirit". Into this phrase - "Jüdischer Geist" - they put everything they disliked - values, ideas and art they hated. Especially the idea of equality (under the law, in a democratic republic) was a thorn in their flesh. The Nazis regarded this idea of equality as a "Jewish invention". The Jews, however, did not unanimously agree that they had invented such - in Nazi terminology - "Jewish ideas". Dieter Wisliceny, partner in crime of Adolf Eichmann, described Nazi ideology in 1946 as follows: Good and evil forces are dominating the world, and the Jews are the evil ones. This Nazi propaganda, said Wisliceny, cannot be grasped by logic or reason; however, it has led to a climate within a society made of millions of people similar to Middle-Age "witch-mania" . Thus the destruction of values, ideas and art became possible - whether they were "Jewish", as Nazis claimed, or not.

The destruction of values, a page of Shoah still under-explored - compared with its other page, the holocaust, the mass murdering ? It is a pity that I did not hear more about that. Time was running - and the arrangement with Vienna Wiesenthal Institute was "maximum one hour", as Michman explained.

If I see my chance acquaintance again, what will I say to him about the effect of the lecture ? These three words: "Aufklärung ist Abwehr (enlightenment is defense)".